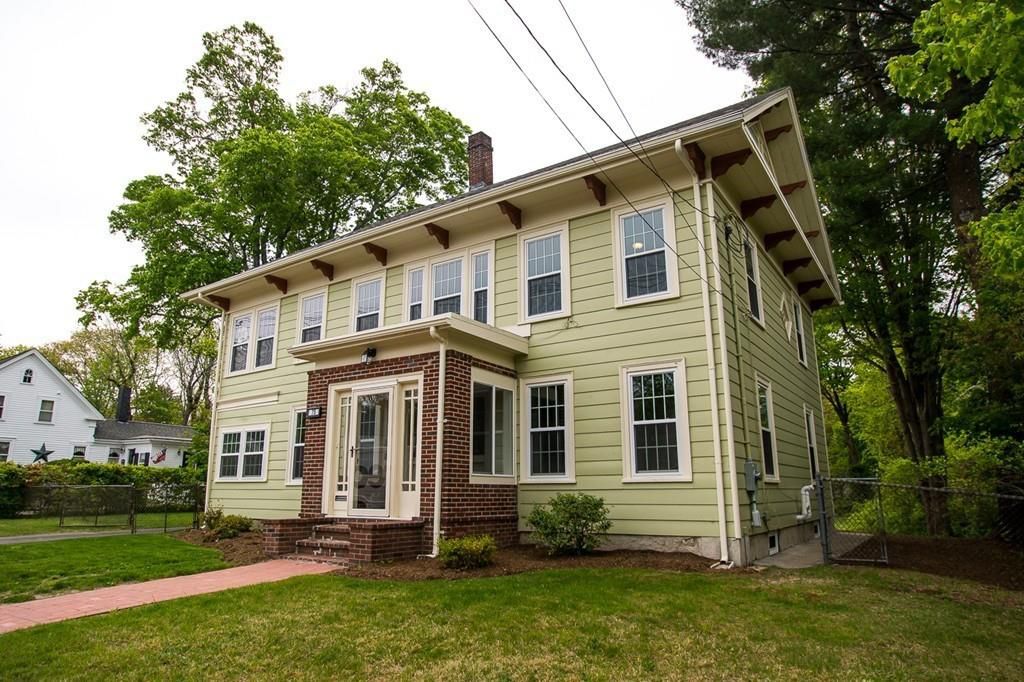 Many years ago, I bought and remodeled a historic home in the center of historic Franklin, MA on Pleasant St. It was a 2.5 story Colonial, or at least built during that era, and one of the few homes on the street that was a combination of wood and brick exterior. I especially loved the fascia/cornice architectural element. It wasn’t necessarily the prettiest home in the neighborhood, but it wasn’t the ugliest, either. Moreover, it had that solid bones of roof, siding, and foundation that were all in pretty decent shape. It had all the hidden potential in the world, especially between my friend/roommate’s remodeling/construction experience and my other friend’s design and decorating connections.

It all turned out perfectly, and while I was eventually ready to return to city life, it’s probably still to this day, my favorite home I’ve ever lived in. When I found this website, I had to reach out. It was the perfect excuse and opportunity I needed to reminisce about and share my story. Even many years later, most of what we were able to do with that old home still applies today.

Sure, a lot of things changed here and there along the way, but we still had a pretty good idea what we wanted to do when we first bought the home. And it was still tough to know where and how to get started. Fortunately, I had a favor to call in. My friend, Eve Ashworth, was great at this type of stuff. She knows how to see things in a different way and able to creatively solve problems. So few people are both creative and organized—and able to channel their energy productively—and she’s one of them. It’s no surprise that she went on to start her own boutique marketing agency in Hudson Valley, New York.

In addition to picking light fixtures, furniture and new kitchen cabinets (this was my roommate’s big project), there were three things specifically we were looking to do with this historic home.

A lot of historic homes have intricate window casements and jambs, and that house was no exception, at least on the main floor. While many of the window casements were more basic, there was a statement window, with a convex curve at the top with angled brick, in the front of the house. It was part of the great room that looked out on to the street. One of the things I hadn’t really thought about was the window covering for this large window. And then when I did I had assumed some type of modular/movable accordion blinds would be best, allowing me to reveal the intricate design of the window casement, while still minimizing the glare. Unfortunately, or maybe fortunately, there wasn’t a good place to install the framing for this type of movable blinds. Instead, Eve suggested a more traditional blind, opaque but thin, one of those old-fashioned pull blinds that would completely roll up . The key for me was the bold color and soft fabric. I had mostly associated pull blinds with the ugly white plastic that was used for old-fashioned projectors and slide shows. But this was something totally different, at least in the vibe it gave to the room, and the overall effect was fantastic.

Maybe it was the kitchen cabinets, but the other thing we did that had the potential to substantially increase the value was to expose and refinish an interior brick wall. When we bought the place, there was the ugliest pink tint wallpaper—thankfully just one layer—on top of several different colors and coats of paint. Here, it was my roommate friend who came through with his old work connections and early-generation technology of historic paint research.

But the real prize was the brick behind the wallpaper, the pain, and plaster. It was one thing to remove all this wall layering, but then still had old paint on the brick itself to remove. At the time, I didn’t even know there was a process for removing paint from brick and then applying a new glossy finish. The result was striking, but no doubt, some of the increased value was baked into the cake. It was pointed out to us by the seller’s realtor—and confirmed by the buyer’s realtor before left escrow that the underlying brick was there.

The Odd Space in the Corner

On the top level of the house, was a smaller story with slanted ceilings that followed the roofline, but then just at the top and off to the side of the spiral staircase was something between a hall and a cubby space. Nowadays, it’s electric cars and net zero homes, but at the time I really wanted to do something with the space as a matter of personal philosophy and environment-friendly living practices. One person told us it might have been a nook for a bassinet for newborns, which wasn’t entirely convincing but which made about as much sense as anything. Plus, the idea of using it as a bassinet didn’t apply.

Knowing I was into eastern philosophy and mindfulness practice, Eve helped me turn this area into a meditation space. It had an eclectic mix of prayer flags and wall art and color fabric barriers and a cushion for seating. It was somewhere between a personal sanctuary for adults and a blanket fort straight out of childhood. I know it’s been around for millennia, but in terms of the recent U.S. fad, I was part of the OG for mindful meditation.

This all happened so long ago that I had to look up what happened to the old home. Turns out, it was completely remodeled again in 2015. A housing boom and a new generation of home trends. Go figure.